During this Summer, we had 2 competitions: the Scarecrow (or Rocket) Writing competition and the Stained Glass Window competition. I am pleased to announce the Winners, as well as the Highly Commended entries, see below.  I thoroughly enjoyed the stories: keep writing! The window designs were all beautifully structured, imaginative and vibrant. I can imagine them in a church.

Thank you all for your entries. It was a pleasure to see them. Later this year they will be displayed in the museum.

'What the Scarecrow Saw' by Florence Whitehead, aged 5

The scarecrow stood in the field looking at Bushey. Whooch a fairy appeared!

“No, No! Don’t eat my crop!” explained the scarecrow.

The fairy nodded and dropped a bag of fairy dust in his hands. The fairy flew away.

“Wait. What is this? Said the scarecrow pointing at the bag.

“It is fairy dust” said the fairy.

The scarecrow scattered the fairy dust all over his crops so that they grow.

Today the scarecrow saw a fairy!

What the scarecrow saw by Richelle Muzammil, aged 8

At first, it was black. Then things began to come into focus. I tried to sit up, but I couldn't — I was in the boot of a car headed to a farm! I just didn't know it yet. Screech! The car skidded to a stop. I went limp although my senses were still very much intact. Two humans opened the boot and took me out.

They stuck me in a wide field full of rabutan*. As soon as they had left, I started to gorge myself on the sweet, succulent rabutan. Then I remembered that I was meant to be protecting the fruits not eating them! Two crows swooped down, and they started to stuff themselves too! I made a growling noise deep in my throat like a rabid dog that surprised even me! The crows looked at me and I stared back at them with bone chilling eyes. They fled, cawing in fear. Only then did I actually take in my surroundings.

In the horizon, I could see dozens of mud huts with thatched roofs blanketed by a vast forest made up of evergreens. Then I realized how big the field really was! It went on for what seemed like forever. The sunset that evening was spectacular, the colours sparkled like crystals. It was beautiful. Each day I woke up early in the morning to the sound of the birds chirping. My life was now in this farm. The owners were kind-hearted, and I was more than happy to protect their crop.

One sunny morning, I saw a black Jaguar (the car not the cat) roll up on the driveway. A woman, a man and a boy stepped out of the car. The man wore a business suit, and he looked like a swelled up red balloon. The boy and the woman wore and looked exactly the same except the woman had a Mr. Whippy's ice-cream hairdo and way too much makeup.

The boy came up to me and started to kick me. He was shouting bad things about the farmers. I did not retort. Usually I would not stand anyone saying a belittling word about the farmers without arousing the wrath in me! But I listened intently and found out that they were thieves, plotting to steal the farmland! I roared so loudly that the heavens shook. They took to their heels and fled, but I knew they'd be back tomorrow.

So that night I did what I had never done before. I left my post to set up a trap. The next day I was ready. As soon as they stepped out of the Jaguar, they tripped over a wire and got caught in a net, then they fell into a deep pit I had dug the previous night, I covered it up hurriedly and stood on the pit. I was a hero and the farm was safe. I stand there to this day protecting the farm from evil doers,

Yes, you guessed it right— I am a scarecrow.

What the Scarecrow Saw by Cordelia Whitehead, aged 8

The scarecrow stood in a hushed way.

Nothing exciting ever happened. People passed him but no-one ever noticed him. He was doing such a good job at scarring the birds away but of course he was just the scarecrow. If only some-one could help him be something special. Fortuanetly a little bird soon came over to help later that day.

The bird was a lovely magpie. In his beakshiny things glistened and glittered in the light. He looked pretty clever too.

He was wearing a pair of round metal rimmed glasses and when he spread his wings it looked just like a book ready to be read. Then all of a sudden he wrapped the scarecrow in silver chains, bangles and sequins. The he flew away.

Well maybe this would spark people’s attention. Later that day everyone who passed the scarecrow stopped to admire its striking decoration.

So next time you pass a scarecrow stop to admire its important work in protecting our food. 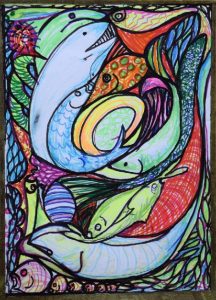 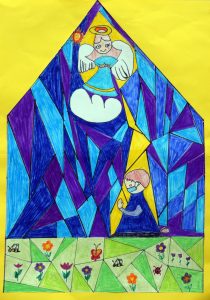 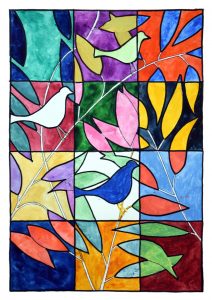 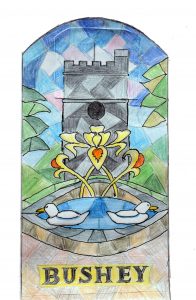 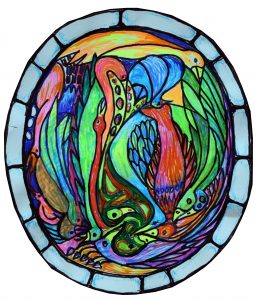