The Museum is delighted to have a significant collection of Bushey Heath Pottery items from the 1920's,  and which have been acquired by gift or purchase over many years. Many of these items are on display in the Museum’s Local History Gallery.

Here is some background...

William De Morgan (1839-1917) is often remembered as the Arts and Crafts Movement William Morris’s potter friend - but he was much more than this: De Morgan was a celebrated London-based designer and potter of lustre-ware, polychrome pottery items including bowls, vases, plates and tiles. His interest moved away from ceramics to a new career as a writer following his successful 1907 publication of his semi-biographical novel Joseph Vance. He closed his pottery business in 1911.

In the 1920s there was renewed interest in his artistic pottery achievements. Artist and sculptor Mrs Ida Perrin (1857-1953) of Holland Park was a great admirer of De Morgan’s work and decided that with the help of talented potter and painter, Fred Passenger (1858-1938) - one of De Morgan’s most skilled former decorators - examples could be made after De Morgan’s designs. Ida and her husband, the London draper Henry Perrin (1858-1938) had a weekend house, The Cottage, in Bushey Heath. A workshop was fitted out, and from c.1922 for around ten years she employed Fred Passenger to make and decorate pottery to De Morgan’s designs, firing being done in a small kiln erected at the side of one of the outbuildings. Items were individually made and decorated, and included a distinctive  mark on the base so that there was no confusion between the products from the former and the new pottery: more details below. Items from the Bushey Heath pottery were sold privately and through London galleries. 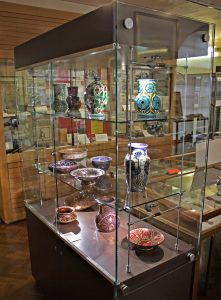 Also in the 1920s Ida Perrin funded a new gallery extension to Leighton House, the late home of the artist Lord Frederick Leighton P.R.A, ostensibly to house her daughter Muriel's sculptures. Leighton House also acquired a significant collection of De Morgan’s pottery, as well as many items made at the Bushey Heath Pottery. In 2015 they loaned their Bushey Heath collection to us for our exhibition, and then in 2019 they invited representatives of the De Morgan Foundation, the Victoria and Albert museum and ourselves to meet at Leighton House because, due to extensive proposed alterations, they would have no area available to display their Bushey Heath collection. We were fortunate enough to become the recipients of the majority of pieces, many of which are now displayed in a new case (right) funded by members of the Decorative Arts Society.

There are a few dozen Bushey Heath Pottery vases in the Museum's collection, pictures below.

Here are the Bushey Heath Pottery bowls in the Museum's collection.

There is a wide range of Bushey Heath Pottery plates on display.

There is one example of a Bushey Heath Pottery tile. 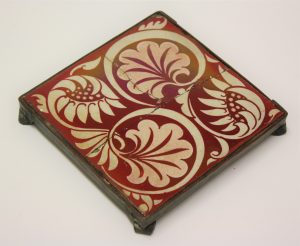 Not everything in the collection acquired over the years has been in perfect condition, as you can see with these examples. But because item each is a unique design, every one is an important part of the collection: together they show the range of designs and decorations used at the Bushey Heath Pottery. When funds permit each will be professionally conserved. 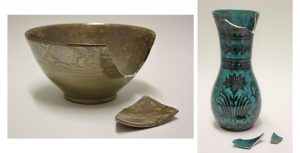 Here are some examples of Bushey Heath Pottery marks to identify these pottery items - and importantly to identify them as separate from De Morgans items. The marks included a distinctive circular shape including two crossed letter P’s (for Ida and Henry Perrin), quartered by De and M (De Morgan) and including ‘Bushey Heath’. This mark ensured that there was no confusion between the products from De Morgan's pottery and the subsequent pottery at The Cottage, Bushey Heath. They also include FP (Fred Passenger) beneath the marks. 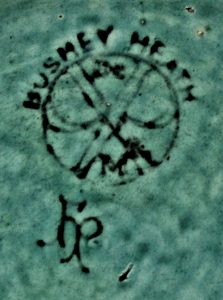 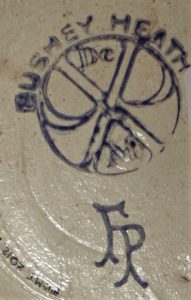 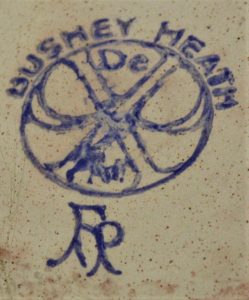 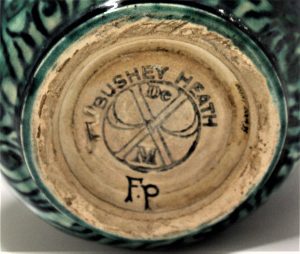 For more information about the De Morgan and Bushey Heath pottery collections, do have a look at these websites: